Best Muay Thai Classes Near Me 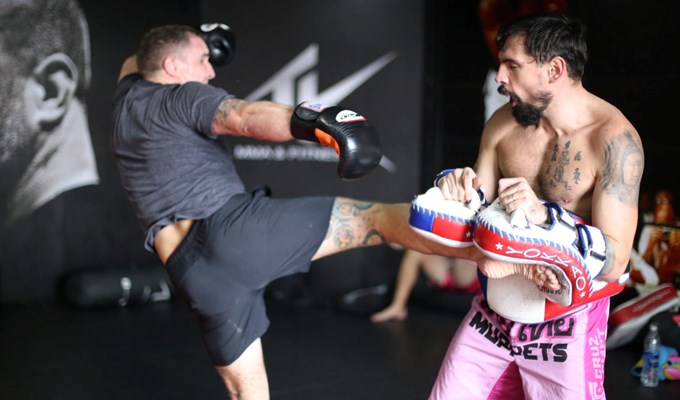 Muay Thai, called the ‘Art of Eight Limbs’, is one of the most effective, immediately utilisable and formidable fighting systems going. Though it may sound decorative and flowery, there is nothing ornamental about this moniker. The name comes from Muay Thai’s combat style: practitioners use a full range of kicks, punches, knee and elbow strikes with power and, hopefully, a degree of grace and fluency. There are eight points of contact, here- two hands, two feet, two knees, two elbows- hence the Eight Limbs.

Muay Thai achieves two goals with incredible proficiency. Firstly, it does what any good fighting system should do, and gives you the ability to defend yourself as and when you need it. Secondly, the controlled aggression needed to make it work will help you to master your own emotions, turning your own fury and drive into something healthy, constructive and energising.

Due to the use of so many points of contact, it can be used effectively at any range, whether you’re a few feet from your opponent, or touching chest-to-chest. It is brutally efficient, as each strike is designed to dish out a maximum amount of damage, and it is easily learned compared to more complex, intricate styles like kung fu or karate (though it will take a lifetime to master, if anyone every truly can!)

It has been tested over and over again, and hundreds of generations have learned it, honed it, and passed it on, making modern Muay Thai as fast and powerful as it possibly can be: it truly is ruthlessly effective.

The Benefits of Training in Muay Thai

Some of the most profound benefits to Muay Thai training include:

Muay Thai trains total strength, fast release power and longer-term endurance. It trains them simultaneously, switching between energy systems at will and making you push yourself for an extended period of time.

It isn’t only limited to the upper body. Core strength is vital. Working a bag, throwing punches at a set of focus pads and sparring itself will engage your core, building and using your deep core muscles. Muay Thai training itself will also inevitably involve a lot of core work. Your legs are vital, too. You will use your legs as you generate punching force, as well as when you’re dancing around the bag, as well as in any given session in which you have to perform sprints, squats, lunges and all that other good stuff.

Muay Thai is an efficient, fun way to work on your cardiovascular fitness – far more so than spending hours peddling away doing steady state on an upright cycle. To improve cardio fitness, you need to place a strain on your heart, making it beat faster to pump more oxygen around your body. As it is so high-energy, Muay Thai demands a great deal of oxygen. It therefore puts a massive strain on your heart (in a good way), which will bring about a great many positive health benefits whilst also benefiting your overall athleticism.

You need to develop fast reflexes and an ability to know how your body moves through space with an acute and unconscious level of detail when training to be a boxer. It helps hand-eye coordination, balance, spatial awareness and full body mindfulness. At any one time, you will have to be able to see a target, react to it, hit it, all while the target is moving, changing position and trying to hit you back.

With all that going on, your coordination, spatial awareness and proprioception will be greatly, profoundly improved.

As mentioned above, Muay Thai is very high energy. You can burn hundreds of calories per hour training. It will also take you into the orange zone for extended periods of time – 85%+ max heart rate, where you will elicit an afterburn effect that will have you burning extra calories for up to 24 hours post-training.

If you want to create and maintain a caloric deficit, Muay Thai will be one of your surest allies.

In addition, the demands placed on your muscles will elicit hypertrophy. Working heavy bags, throwing punch after punch at the focus mitts, and running through the countless hours of conditioning that underpin a solid Muay Thai routine will all help you to build muscle.

There will undoubtedly be lots of Muay Thai classes near you. However, for the best Muay Thai instructors in Dubai, you should look to Muay Thai Muppets.

Muay Thai Muppets are UAE’s leading provider of Muay Thai coaching to all levels of ability, beginner to advanced, providing both group and one-on-one Muay Thai and Kickboxing coaching exclusively at GymNation.

Muay Thai Muppets head coach, Jay Woodham, was a professional Muay Thai fighter, with more than 80 fights under his belt since 2000. Known as The Handsome Hero, he lived and trained for 3 years in Thailand and fought all over the world, before moving on to become a full-time Muay Thai coach and fitness instructor.

Muay Thai Muppets offer classes for all levels, whether you’re a complete beginner or a seasoned fighter.