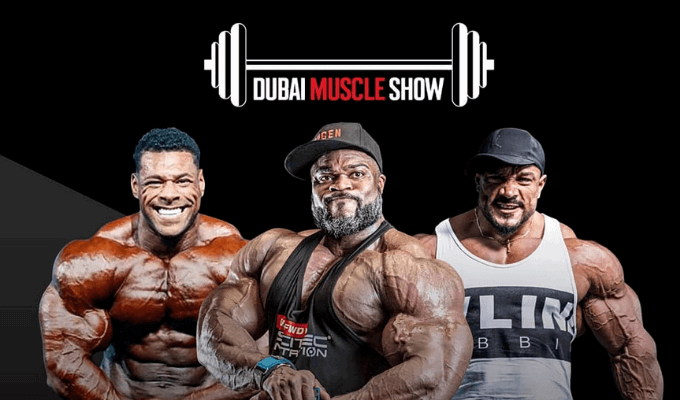 Held in collaboration with Dubai Sports Council, the Dubai Muscle Show is the biggest deal in fitness across the Emirates and wider Middle East. Fitness buffs and athletes get to mingle; trainers and trainees get to meet and greet; aspirants get to hang out with the top names in the fitness industry over a three-day extravaganza. The one time where searches for "Gyms Near Me" takes second place to search for Dubai Muscle Show!

It’s a great event for professionals as well as amateurs. Retailers and distributors find one another, liase, and make the next big thing happen. Thousands of fitness and wellness personnel descend on Dubai for the weekend, networking with one another, making themselves known to those who need to know them. It gives industry leaders and newcomers alike the opportunity to educate the market about their products and show off their brands, whilst key figures in the Middle East fitness and wellness industry mingle and see what’s what.

It is inspirational and informative, as some of the greatest stories in the fitness industry are told and some of the best advice and training information is shared. The best gyms in Dubai, state-of-the-art fitness equipment, and training gear are on show and cutting-edge companies host stalls where you get to learn everything new in the fitness world.

2019 was no exception- which is good, as the current climate is making expos like the Dubai Muscle Show tricky to hold this year!

Though the goods were as good as ever in 2019- with the best in next-generation tech and training advice on display- it was arguably the names involved in kicking it off that really made it shine.

None other than Mr. Phil Heath himself- former Mr. Olympia, seven times, having won the title every year from 2011- 2017- hosted the most hotly anticipated event, speaking and greeting and showing everyone what a true modern-day champion looks like!

Phil’s excitement was palpable. He was there all three days, speaking on stage to a roaring audience, meeting fans and pros alike, shaking hands, and inspiring people. The Middle East has always supported him specifically and bodybuilding and barbell athletics more broadly; Dubai Muscle Show 2019 was a great chance to reacquaint that relationship, with Phil giving back to his fans as much as they have given to him.

After all, what could beat an appearance by a seven-time Mr Olympia? Maybe an eight-time champion with 26 IFBB titles to his name. Ronnie Coleman himself joined Phil Heath. In 2011, he launched Ronnie Coleman Signature Series, a company that provides sports nutrition and wellness products for bodybuilders and other athletes. He Ronnie Coleman Signature Series held a booth at the show between 6th-7th- needless to say, they got a lot of attention, with plenty of fans and athletes coming up to meet the legend himself and hear about his venture and their new products.

Rounding out this lineup, the Dubai Muscle Show 2019 managed to nab Kai Greene, winner of 3 Arnold Classics between 2009-16.

Kai’s story is amongst the most inspirational in bodybuilding and fitness. His truly was a rise from nothing to superstardom and success. An orphan, relegated to a series of foster homes and institutions, he used his passion for fitness and bodybuilding to transform his life. He rose to become one of the top athletes in the world, before more recently turning to acting, which has included a role in the hit Netflix series Stranger Things.

Other international athletes set to appear at the event include Brandon Curry, who won Mr Olympia 2019 and Arnold Classic 2019 and is fast becoming a heavyweight legend, alongside Kuwait-based Big Ramy, the Middle East’s most famous bodybuilder. Big Ramy’s rise has also been an inspiration, especially to those in the Middle East. He managed to go pro in less than three years, representing something of a meteoric rise to the top. He earned global recognition for his performance at the 2017 Mr Olympia, which put him on the map, and has taken part in several major competitions in his career to-date.

Angelica Teixeira and Sadik Hadzovic rounded out the list. Angelica Teixeira, the bikini champion, winner at 2017 and 2018 Ms Olympia and 4x Arnold Classic winner from Brazil, showed up on the great form, treating her fans to the energy that they have come to expect from her. Sadik Hadzovic, the American IFBB professional physique competitor and winner Arnold Classic winner in 2015, similarly took the convention by storm. With headline athletes conducting on-stage speaking sessions and meet-and-greets throughout the weekend, Dubai Muscle Show was epic. Fans and pros alike felt the energy and had a great time.

Obviously, the Covid-19 pandemic has shut down large parts of the world during 2020. The fitness industry has suffered from this, with large shows being canceled and world tours going into hiatus. However, though this year might be a write-off, 2021 is set to be a big one.

Dubai Muscle Show, Dubai Active Show and Dubai Active Industry, collectively the Middle East’s biggest fitness exhibition, will be going ahead between 14th-16th January 2021. Held at Dubai World Trade Centre, it is giving fitness enthusiasts some well-needed excitement and something to look forward to, and hopefully giving fitness companies some much-needed buzz and an injection of capital after a year of trading on the back foot.

Dubai Muscle Show has stated clearly that their attendees’ health and wellbeing is their primary focus and concern- hence they have postponed the event to 2021. They will also be keeping an eye on current trends and paying attention to best-practice in health and sanitation practice, meaning that attendees should be able to join in without worrying too much about infection.

Of course, more advice and details will be provided closer to the time.

The health and wellbeing of our attendees is our primary concern. While keeping a close eye on recent developments and after consulting with authorities and many valued customers and partners, we have decided to postpone the event until January next year.

With ongoing global health concerns and the uncertainty around international travel in 2020, as an industry, we all felt this was the sensible decision to make to ensure all partners can be involved in the show once again. Our goal has always been about bringing together the best international names with the entire Middle East fitness community.

We believe our industry is resilient with a bright future, and we look forward to welcoming you on 14 – 16 January 2021 in a show of strength for the Middle East.

Dubai Active Show tickets and Dubai Muscle Show tickets will be available shortly, as will a full list of booths and guests, keep an eye on the GymNation social media pages for the exact dates.