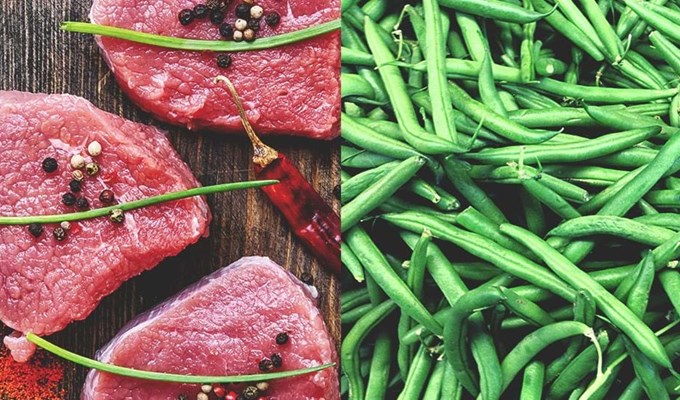 Every cell and drop of our blood contains many thousands of different types of proteins, and each of these proteins is built from the protein we eat. It is found in every imaginable type of food. Animal products (including red meat, pork, chicken, fish and eggs) are usually considered the most protein-rich. But worldwide, it is the protein found in plants that supplies at least 60 percent of the total protein consumed by humans.

So if you think protein equals meat and dairy, think again. Whole grain cereals, nuts, beans and legumes, and an amazing array of fermented plant foods such as tofu and tempeh, are all rich sources of protein.

How do animal and plant proteins differ?

Although all the amino acids are necessary, the remaining 11 can be either sourced from food or manufactured inside the body. While plant foods may still have all the essential amino acids, the levels tend to vary. Also, plant proteins are generally harder to digest and are absorbed more slowly.

However, the relative benefits of animal and plant proteins are not straightforward. While it might be great for building muscle, for example, high levels of circulating leucine are also present in people at risk from diabetes.

And while plant proteins may not supercharge muscle building after exercise, they may help with longer term health. Huge population data from the USA, analysing death rates over 26 years, has shown high consumption of protein from animal sources (meat, eggs or dairy) slightly increases mortality. It was processed and unprocessed red meats (including pork products), not fish and poultry, that were most dangerous.

At the same time, higher consumption of protein from plant sources (including breads, cereals, pasta, beans, nuts and legumes) improved longevity. The health effects of protein-rich plant foods may come down to specific benefits from the combinations of amino acids within each food type, although it is likely the full nutritional mix of plant foods is also important. Plant foods also have healthy mono- and poly-unsaturated fatty acids, omega-3 fatty acids, antioxidants, vitamins, minerals, phytochemicals and dietary fiber – a healthy cocktail of ingredients.

What protein do I need when I’m exercising?

Consuming protein during exercise is not the secret to unlocking more power or sustained performance. But protein is needed afterexercise to repair, replenish and rebuild muscle. A wave of protein synthesis begins in the muscles in the hours after exercising. While measurable for up to 24 hours after a workout, most of the action takes place in the first four to six hours.

Whey protein dominates the sports protein supplement market precisely because it acts quickly. Dairy protein (a mixture of casein and whey) is rich in essential amino acids, but whey protein is the most rapidly digested, releasing amino acids into the blood within 30 minutes. This gives it the edge over many other foods – including meat, fish, eggs, legumes and casein, which each require at least one hour before the stomach releases most of the protein for digestion.

Current scientific knowledge suggests the maximum actions of protein after exercise peak at a total ingested dose of less than 40 grams. (This effect depends upon the type of exercise, age and gender of the person.)

But building and repairing muscle is a complicated process, and extra protein amounts to only a small percentage of the total gains. There really is no natural protein solution that delivers the rapid anabolic gains, T-shirt-exploding chest expansion and bulging biceps promised by some advertising.

So while chugging protein will assist with some muscle gain after exercise, it isn’t a reason to abandon real food. As with all biological systems, protein synthesis is carefully limited within the muscles.

And sorry, no amount of consuming high protein foods or shakes when you are not exercising will make you magically grow more muscle.

Apart from meat and dairy, where is the best protein?

The plant kingdom is full of nutritious high protein foods. The wonder of plant-based proteins is that you can find something for breakfast, lunch, dinner and snacks in between. Here are some you should try today …

Finally, can I get all my dietary protein from vegetables?

It’s easy to achieve adequate protein intakes if you mix and match your plant sources. No, you are not going to get enough protein from celery or lettuce alone, so incorporate lots of different high protein plant foods in your diet.

The debate about meat and health will continue for many years. But in the meantime, for a healthy omnivorous diet should aim to have red meat no more than three times a week, with fish and poultry making up the other meals. Try a meat-free meal on occasions, using the tips above.